#FBF: Finding a Chagall in Zagreb 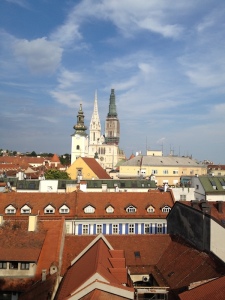 Fairytale architecture in the city of Zagreb

So the tagline for this blog is food, art and travel. So I’d better take a short detour from my food obsession to write about my love of globetrotting, museum hopping and finding an unexpected treasure in the Museum of the City of Zagreb in Croatia’s capital.

We spent two weeks in Croatia last year, starting in the walled waterfront city of Dubrovnik. We made our way up the coast to Split and Zadar, then the Plitvice Lakes in central Croatia. Finally, we ended in Zagreb. I found Croatia’s capital to be highly underrated and overlooked by travelers. But it’s full of fairytale architecture reminiscent of Prague and unique city museums. We visited three museums: The Museum of Contemporary Art, ode to heartbreak The Museum of Broken Relationships and the aforementioned city museum. The museum is housed in a lovely restored 17th century building and offered a fascinating exhibits highlighting the history of the city and Eastern European country.

Somehow this museum came into possession of a Marc Chagall painting, “Girl With a Bird,” and I made it my mission to find it among the densely packed artifacts and artworks in this three-floor attraction. I had to scan the museum a couple of times before I found it. 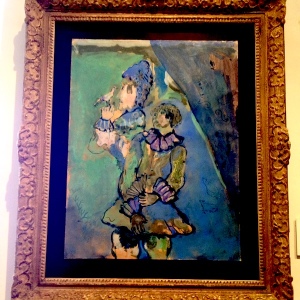 I love the French-Russian artist’s colorful blend of cubism and surrealism. His paintings are a more whimsical version of those of Pablo Picasso’s.

“When [Henri] Matisse dies, Chagall will be the only painter left who understands what color really is” Picasso said in the 1950s. Finding the painting made our visit a scavenger hunt as well a cultural outing. The Chagall is listed as one of the Top 5 Secret Things to See in Zagreb.